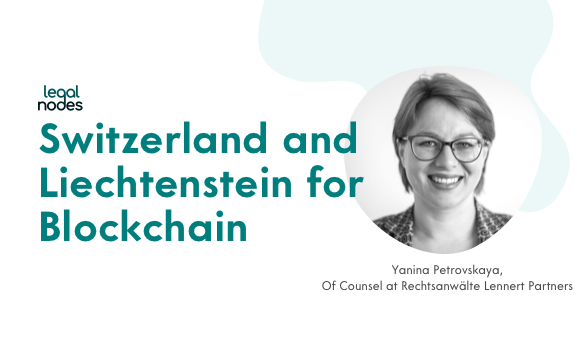 So far, this year has truly been the year of blockchain regulation: in less than half of 2019, countries that have already regulated blockchain were joined by Italy, The People`s Republic of China, Bahrein, and Finland. In addition to that, with The U.S., Hong Kong, and Malta issuing additional consultations for crypto-powered businesses, we can confidently state that the trend of “legal blockchain” is on the rise.

Wondering who will be the next to join the “regulatory club”? On May 7, 2019, The Liechtenstein Act on Tokens and VT Service Providers has been passed to the Parliament. Some claim it to be one of the best legal acts among those that regulate blockchain technology.

To clarify everything about upcoming regulation in Liechtenstein and existing rules in its` neighbor country, Switzerland, Legal Nodes team have interviewed Yanina Petrovskaya, Lawyer & Certified Translator / Of Counsel at Rechtsanwälte LennertPartners during a Facebook livestream. If you hadn`t had the chance to tune it – don’t you worry, as we have put together all that you need to know down below!

The Act uses the term “vertrauenswürdige Technologien” (trustworthy technologies) instead of more usual “DLT” and “blockchain technology”. What was the reasoning behind the use of this specific legal construction instead of those used in other jurisdictions?

The term “trustworthy technology” comes not from legal, but from a technical perspective, because the distributed ledger technology is evolving all the time. So, the experts who were working on the Act believed that maybe in 5 or 10 years it may not even be called “blockchain” or “DLT” anymore but rather a new technology very similar to what blockchain is. As a result, they`ve used this neutral term to avoid future amendments.

What will the material scope of the upcoming Act be and to which activities will it apply?

It is very important to understand that this Act will not be applied to activities that are already covered by the financial market laws: everything related to financial services, banking, payment institutions, investment funds would still fall under the financial market legislation, no matter if it uses blockchain technology or not.

What licensing and other requirements will it impose on companies that carry out their activities in Liechtenstein?

Requirements to the activities covered by this Act concern, first of all, the management and personnel of the company – they should be reliable persons, which can be proved by a clear criminal record and experience in the financial industry.

Businesses, that are looking forward to providing activities covered by the Act would need to receive authorization from The Financial Market Authority.

Are there any other acts that may be applicable to blockchain companies (exchanges, funds and custody services providers)?

Moving to Switzerland, it was the among the first countries in the world to issue a detailed classification of tokens back in February 2018. However, as it is not part of The European Union (EU) and The European Economic Area (EEA), are there any limitations as of the flow of capital and financial products that have to be considered by blockchain companies?

I would say so. Although Switzerland and the EU have bilateral agreements, financial products, especially security tokens issued via Security Token Offerings, are not allowed to be offered outside of Switzerland. This is why it is so important to clearly define your target market – if it is Europe, then it might be better to conduct activities from countries like Estonia, Malta or Liechtenstein. It is highly recommended to be done beforehand, prior to incorporating a company.

That is because one of the main legal issues is whom you would be able to target with your activities – so when you issue your products in Switzerland, you might only be able to target qualified European investors.

In addition, the Swiss Financial Market Supervisory Authority has adopted several FinTech-supporting initiativesthat allow companies to accept public deposits with exemptions from the banking law. Do you find these exemptions to be competitive compared to existing regimes in other European countries?

It is important to remember that Switzerland in general is a very expensive jurisdiction for FinTech companies, both because of legal and operational costs. On the one hand, these initiatives allow you to accept funds from the public, but on the other hand, it might not be the best solution just based on costs and timings.

In addition, both the sandbox and the FinTech license are relatively new regimes, so there wasn’t much practice in this field.

Lastly, what are the biggest pros and cons of operating blockchain-powered businesses in Switzerland and Liechtenstein?

Speaking of Switzerland, this is a very friendly jurisdiction towards blockchain and business in general. In addition, governmental authorities are very supporting and open to communication, which is very different from most countries, where you may receive fines or even jail sentence for violating the law.

What is really interesting about Switzerland, is that it is very independent from the biggest financial markets (the EU and the U.S.), so some businesses might find it very convenient to operate from there, having their headquarters on a “neutral territory”. However, this comes with having restricted or no access to the European financial market when distributing financial products. A lot of companies that are based there actually also choose to have an office in Liechtenstein to receive access to the European market.

Businesses also have to take into consideration jurisdiction`s costs, as Switzerland ranks among the most expensive jurisdictions for blockchain projects. Among others, it is because of the “high quality” of the jurisdiction itself. Companies can always be sure of the legal certainty of Swiss laws. Switzerland takes great care of persons subject to certain regulations and publishes guidelines and frameworks, including those applicable to DLT-enabled companies.

It is very important that both Swiss and Liechtenstein banks do work with blockchain companies. Sure, compliance procedures are not always simple and may take a few months, but there are actually several banks to choose from.

As of Liechtenstein, having a unified legal act for business using trustworthy technologies is a very big plus. However, because it is part of the EEA, it is influenced by the European policies and therefore is not as independent as Switzerland.

Speaking of banking, which banks are the most receptive for crypto businesses?

Among the first banks that started working with blockchain companies were the Falcon Private Bank (Switzerland) and the Bank Frick (Liechtenstein). And right now, there are over 10 banks in both states who do work with blockchain businesses.

There are legal issues with blockchain banking, however. Banks have to adjust their internal policies and operations, educate their staff, which obviously doesn’t happen overnight. That`s why most banks would only work with projects exclusively from Switzerland and Liechtenstein.

In addition, because about 25% of world assets are stored there, banks usually have very high fees, including on-boarding fees. Compliance procedures may also be quite long and take up to 2-3 months. With all of that, blockchain banking is far from being in a perfect place, but we are definitely getting there.

With recent risings in the price of cryptocurrencies, we should definitely expect a new wave of public attention to blockchain. Undoubtedly, that will lead to more and more countries adopting blockchain-specific acts, making for a more regulated and credible legal climate in the industry.

Legal Nodes Team is beyond grateful to Yanina for agreeing to do an interview with us, making yet another step to share relevant regulatory information with our readers. Make sure to follow Yanina`s Facebook page where she does regular livestreams about legal news in the blockchain industry in Switzerland and Liechtenstein.

Disclaimer: the information in this article is provided for informational purposes only. You should not construe any such information as legal, tax, investment, trading, financial, or other advice.

Some of the regulatory provisions that have not entered into legal force are referenced above and are subject to change.